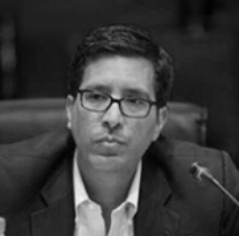 Sergio Rodriguera Jr. is Senior Consultant for Artificial Intelligence and Machine Learning at the Federal Reserve Bank of Boston. In addition, he is an advisor to General Radar, a Millimeter Wave radar startup building transformative technology for the autonomous vehicle and national security sectors. He was founding team member and Chief Strategy Officer at Credit Junction, the first asset-based lending FinTech platform transforming the way small and mid-size enterprises (SMEs) access growth capital utilizing data intelligence to offer up to $10 million in debt capital. He was appointed by the Secretary of Commerce to serve on the Trade Finance Advisory Council providing recommendations on emerging technologies to improve access to capital for small businesses. He served as a Navy Intelligence Officer in the Navy Reserves where his last assignment from 2015 to 2018 was leading a team of technologists advising the Director of Intelligence on the Joint Chiefs of Staff (J-2).

Previously, he was a Professional Staff Member with the Committee on Financial Services in the U.S. House of Representatives where he focused on monetary policy and technology, primarily cybersecurity and payments. He served as Special Advisor to the Under Secretary for Terrorism and Financial Intelligence at the Department of Treasury advising on anti-money laundering and sanctions. In addition, he served a combat tour in Afghanistan in 2010 as Executive officer of the Afghanistan Threat Finance Cell, earning the Defense Meritorious Service Medal. After being commissioned as a Naval Officer from Officer Candidate School, he served aboard the USS CURTS (FFG-38) where he conducted two overseas deployments. He is a graduate of University of California Santa Barbara and Naval War College.